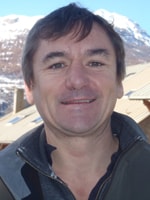 The Apartment.... On the lower end of La Grand Rue, Briancon Old Town is " La Maison du Pape" where Pope Pius VI stayed in exile for 2 months in 1799 under the orders of Napoleon. He and his entourage took up most of the building but this apartment was where the Pope himself resided during his time in Briancon. The apartment is on the first floor and some of the original features remain. It is a bright and roomy unit having high ceilings and large picture windows which allow lots of light. The main living room has wooden fitted wall units with sash curtains for storage and a charming recess also framed in wood where the double bed sits. The fireplace has an electric radiator installed in it as the rest of the apartment is heated with electric also. The kitchen is large enough for a dining table and has fitted units all round. There is a hallway that is large enough to store coats / skis and boots and the shower room has toilet and sink also. Being a unique property in Briancon Old Town, there are no Coprop charges to pay, only the local taxes. This is a lovely apartment with character and charm... The Area.... This property is located on the lower part of Briancon's old town, just metres away from the famous Porte D'Embrun.. The Old Town is a medieval treasure, hidden away in the heart of the southern alps. It is now part of the UNESCO World Heritage list, and as such is being slowly restored so that it remains with us for many more centuries to come.. It is a fantastic tourist attraction now, and in summer, people come from all over to marvel at its cobbled streets, narrow lanes and passages and ancient churches.. The old town is a short bus ride from the ski lift at the bottom of Briancon and also only a 20 minute drive from Montgenvre and the Italian border..

This “jewel in the crown” is one of the best kept secrets in the southern alps. Here the high tree line coupled with amazing off piste make it an all-round ski paradise. Unlike many other mountain resorts, The Serre Chevalier Valley is made up of many villages and hamlets as well as the town of Briancon, the highest town in France.

Monetier Les Bains, the highest of the villages ,has a typical alpine atmosphere as well as having the beautiful open air spa baths. Here you can relax after a hard days ski and enjoy the magnificent views of the hanging glacier and snow capped peaks.

Serre Chevalier isn't a purpose built resort and as such is an ideal place to consider having an alpine home with all of the facilities associated with normal living – transport, education and shops. At the same time this amazing resort is only a few kms away from hidden valleys, high mountain pastures and the vast Ecrin national park.

Transport to Serre Chevalier is much easier than before with regular flights to both Grenoble and Turin airports.